Thank you to everyone who supported our annual Women of Distinction and Community Partners Gala in 2021. Stay tuned for information regarding this year's event on Wednesday, April 27, 2022. 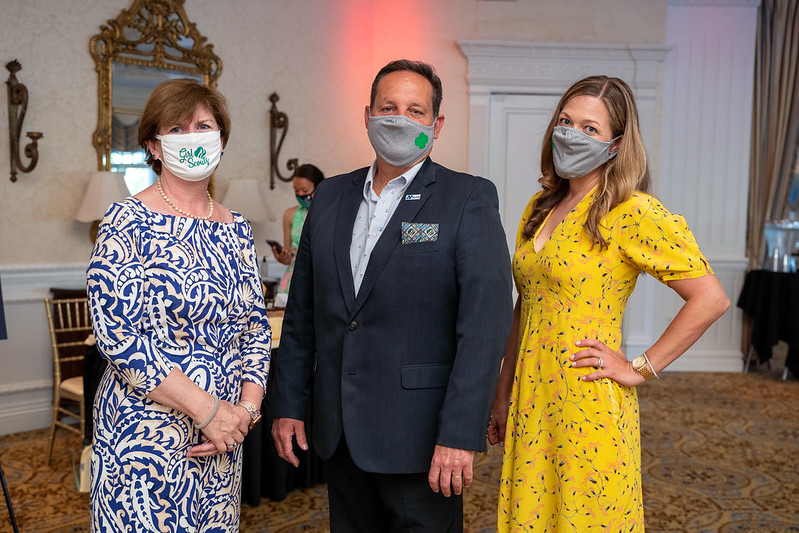 A Girl Scout professional for 33 years, Abdullah has impacted the lives of countless girls and women in Monmouth and Ocean counties. She is the chief mission officer for Girl Scouts of the Jersey Shore and serves as president of the Toms River Area Branch of the NAACP. Abdullah is a tireless advocate for civil rights, social justice, children, arts, and history. She volunteers for a host of national, state, regional, and local organizations that support these efforts. She was named Women’s Advocate of the Year by the Ocean County Women’s Commission in 2016. She is the proud mother and grandmother of three children and seven grandchildren, and widow of the late civil rights and Head Start activist, Saleem Abdullah. Barone has held numerous leadership positions in healthcare and technology. She currently serves as vice president of Development, Volunteer, and Guest Services at CentraState Healthcare System in Freehold. She has a long history of community volunteerism, serving as president of the Monmouth Ocean Development Council, a board member for Affinity Federal Credit Union, and honorary commander at the Joint Base McGuire-Dix-Lakehurst for three years. She also served on the Girl Scouts of the Jersey Shore development committee. Barone has two sons and six grandchildren. Buteas is chief government affairs officer of the New Jersey Business & Industry Association and executive director of NEW JOBS, a political action committee in New Jersey. She serves on numerous boards and councils that support education, women in government, health benefits and economic and workforce research. She also serves as sergeant of arms for the Democratic State Committee. She was recently named a “Barrier Breaker” by Jersey's Best magazine and in 2018, Buteas was named to NJBIZ’s Best 50 Women in Business list. Nicknamed the “energizer bunny” for her unbridled enthusiasm, Gaffney is vice president of the foundation at Monmouth Medical Center Southern Campus (MMCSC). She has enjoyed a long and rewarding career in healthcare and has helped lead many local causes, including chairing the American Heart Association Heart Walk in 2011. She serves on the executive board of the Monmouth/Ocean Development Council and on Girl Scouts of the Jersey Shore’s development committee. Denice and her husband have two grown children and four grandchildren.

David was raised in the business. He interned every summer at ENCON starting in high school and experienced every single job, learning from the ground up.

David feels incredibly fortunate to be in a generational business. David came on full-time in 1993 and worked his way up to president. He’s most thankful for having an incredible working relationship with his father Marty – who founded ENCON in 1968 - for over 26 years which is rare for generational family businesses.

David’s vision is for ENCON to continue to lead the industry over the next 50 years, both in the use of technology, growing the team, and working with customers who appreciate the value of partnering with ENCON. “I give so much credit to our team and am really proud of their work and the degree of complex projects they have completed,” says David. “Some of our top performers have been with the company for over 40 years.”

While Marty taught David to be a problem-solver early on, at the same time his mother Micki taught him compassion. This “figure it out” mentality mixed with his compassion for people and charity is a common thread throughout the company, and a value instilled in their team. While ENCON has always supported charities and the local community, David has taken it to the next level with the creation of ENCON’s Rock & Bowl charity bowling event to benefit the Make-A-Wish Foundation, and David was recently named Chairman of The Board of Make-A-Wish New Jersey. David and the team are proud to have donated over half a million dollars to charities nationwide. Indursky was named president of ENCON in 1999 after growing up in the family business and learning about it from the ground up. He feels fortunate to be in a generational business, founded by his father in 1968. He credits his mom with teaching him compassion, a value that is embraced by his team through its charitable support. He was recently named chairman of the board of Make-A-Wish New Jersey. He and his team are proud to have donated over half a million dollars to charities nationwide.

Man Enough to Be a Girl Scout Malagiere has established a niche in the floral design industry on the Jersey Shore, leading the team at Narcissus Florals, an award-winning, wedding, event, and everyday florist based in Toms River. The business expanded in 2019 with the acquisition of Mueller’s Historic Florist of Spring Lake. Malagiere serves as executive director of the Ocean County College Foundation and was recently awarded the President’s Award for college-wide excellence. He is president-elect of the Kiwanis Club of Greater Toms River and served as an honorary commander of Joint Base McGuire-Dix Lakehurst from 2013-2016. He and his husband, attorney Jonathan Z. Petro, were honored with the 2017 Red Triangle Award for their dedication and contributions to the mission of the Ocean County YMCA. Krautle is deputy director at the Monmouth County Health Department. She been a part of the department for 30 years and has worked to promote and protect public health through many challenges including two hurricanes, infectious diseases such as anthrax and Ebola, and now the coronavirus pandemic. She is a recipient of the Governors' Nursing Merit Award and was named the 2018 Public Health Nurse of the Year. She attributes her sense of adventure and leadership skills to her childhood years as a Girl Scout. An Ocean County Health Department employee since 1994, Regenye has assumed many different roles and responsibilities, from community health planning and directing public health emergency preparedness and response, to his current position as health officer and director. He oversees a team of 225 employees and an annual operating budget of $26 million.  He and his wife have two children. Dr. Roy serves as the director for Emergency Preparedness and Planning for Ocean County Health Department. He is currently coordinating the countywide response to COVID-19, where he has led the effort to conduct over 40,000 tests and has provided over 100,000 vaccinations to Ocean County residents. He has also coordinated major countywide emergency response efforts. He served several roles in the United States Air Force for which he been recognized and is active on numerous community boards and commissions.